From a Little Dog 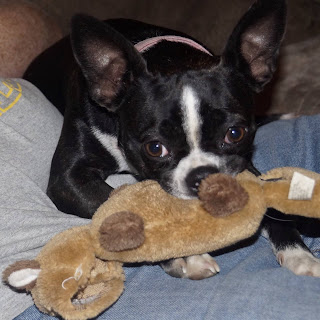 When we first saw Mimi (then called Salt), she was quivering. I imagine she was scared, being abandoned by a second family because of her uncontrollable seizures. The veterinarian’s report stated she had experienced 18 seizures in just a few days. Reportedly, the children of the family surrendering the little girl Boston Terrier were weeping as they relinquished control. She looked so vulnerable at 17 pounds and shaking uncontrollably. We knew nothing of how to care for an epileptic dog, but we could not turn away and brought her to our home. She was three years old.

She refrained from seizing for at least a week, and then they came. She rocked and screamed and frothed, losing control of her body. Watching her convulse and hoop and holler is terrifying.  Eventually, the involuntary movement-tsunami stops and she starts pacing, sometimes while still blinded by the seizure.  Occasionally, if we are not careful, she has falls down the carpeted stairs in the family room. Sometimes, the wandering lasts for hours.  After the worst of the seizures, it can take a couple of days until she regains her sweet, affectionate personality. We have become accustomed to her pattern. She will go from 3 to 8 weeks with no seizures, and then will have from two to eight spells over one to three days. Mimi takes 20 pills per day.

Why do we let her go on like this?  Because the majority of the time, she is playful, loving and loyal. Mimi, at around 10 years old still throws her toys in the air and playfully catches them. She loves nestling in a lap to have her back and neck stroked. Every day when I come home from work, she jumps in my lap and smothers me with kisses, finishing by collapsing lovingly into my lap. She follows us from room to room. She is loving and playful as can be when not in the monthly grips of a seizure.

Many times a veterinarian has suggested that her condition will deteriorated and has offered the option of euthanasia, but each time she bounces back. Last week, post-seizure, her back legs grew weak after a particularly strong bout. The vet wanted to conduct a CT scan to determine the neurological cause. We declined. There is no cure for Mimi’s ailment beyond the handfuls of pills she downs daily. Sure enough, within a day the strength in her legs returned.  She is playing, and kissing and loving again.

For one or two days a month, Mimi is unwell.  The doctors say she does not feel the seizures and she is not in pain.  For the rest of the month, she leads a damn good dog’s life. For now, the good more than outweighs the bad. The peaks more than compensate for the valleys. Such a sweet, caring soul should not be extinguished because of an imperfection. We are all imperfect.
Posted by Lynne Bratcher at 9:34 AM